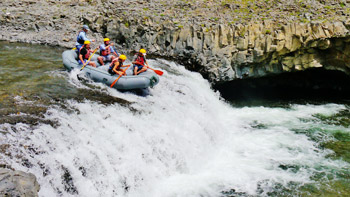 "My July '12 trip on the Orkhon River was a once in a lifetime expedition I would love to do again and again. Add to the fact that this rafting trip occurred in the pristine wilderness of Mongolia and it made the experience all the richer. From navigating the road-less grasslands and wildlife-friendly canyon rivers, to sharing his wealth of knowledge of local customs and fauna, Pat Phillips helped make my Mongolian river adventure an unforgettable story I can't wait to share around future campfires."

This trip is classic Mongolia – amazing scenery, culture, whitewater action, wildlife, and pristine riverside camping. Journey through the rolling countryside to explore the enchanting, picturesque Orkhon River Valley! The magical canyons and waterfalls of the upper Orkhon Gol await adventurous kayakers and rafters. Downstream, floating through the Middle Orkhon Canyon, we enter wild Mongolia as the sheer canyon walls keep out grazing herds of animals. Playful rapids keep it exciting, and the more peaceful parts of the river allow us to relax- but pay attention! You may catch a glimpse of a shadowy, elusive wolf.

Packed with adventure, history and culture, and amazing landscapes, this 8-day itinerary explores the whitewater canyons of the Orkhon River from it’s source in the mountains, through isolated canyons carved by the river as it winds through the Mongolian countryside.

* This 8-day itinerary is designed for the client already in Mongolia. Please note that MRA services begin and end with pick-up and drop-off in central Ulaan Baatar, and do not include airport transportation, lodging, or any sightseeing in the Capitol.

Day 1: Depart UB and drive 6 – 8 hours to the Upper Orkhon Valley. Along the way we will see Buddhist monasteries, ancient sites, and the sublime beauty of the Mongolian steppes. Camp near the river tonight.

Day 2: After breakfast we will float for a couple hours through easy Class II rapids and beautiful scenery on the historic Orkhon Gol. After lunch, we drive another 55 km (2 hours) on country roads and camp in an enchanted landscape near the renowned Orkhon Waterfall.

Day 3: After breakfast and breaking camp, we drive a short distance to our starting point for rafting more challenging whitewater in the dramatic Class III – IV upper canyons of the river. Enjoying our lunch along the way, we’ll take off the river later in the afternoon and drive a few scenic hours before making camp and devouring dinner near Har Horin. Relax at another perfect camp beside the river that night.

Day 4: Once again we break camp after breakfast, then we’re off to sightsee historical Mongol monuments and Erdene Zuu Khiid, one of only a few Buddhist monasteries to survive Mongolia’s socialist period. Following the river along the Orkhon Valley we visit the ruins of Kara Korum (Mongol Empire 1200 AD) and the Buddhist temple complex built from the rubble. Gaze at the windswept plain and imagine the once great citadel razed to the ground by vengeful Manchurian invaders in the late 14th century. Listening to chants of Buddhist monks, stroll around exquisite Erdene Zuu Khiid, the oldest Buddhist monastery in Mongolia, built in the 16th century from the rubble of Kara Korum. Tonight we will stay at a local guest house.

Day 5: Drive north 4 – 6 hours (200 km) to the starting point of the Middle Orkhon River Canyon near the village of Saikhan, which is renowned throughout Mongolia for it’s sweet fermented mare’s milk. In the afternoon/evening we can relax, pre-rig the boats for our upcoming self-support trip, and camp next to the river.

Day 6: After breaking camp and rigging boats in the morning, we will launch down Mongolia’s longest river into its remotest canyon. Isolated by high cliff walls, spot unsuspecting wildlife and paddle small rapids. We make our cozy camp riverside that night upstream of the gorge and whitewater. The scenery is stunning.

Day 7: This day promises exciting whitewater as the canyon walls rise higher and become sheer. After a hearty breakfast we enter the deepest and narrowest part of the canyon for some quick and closely spaced class III rapids. Eventually the rapids let up, but the fantastic scenery continues, and abundant wildlife is everywhere in this isolated landscape. 50 km below our starting point, the deep canyon walls descend and there are good camps in this area.

Day 8: After an early departure from camp in the morning, we float the last hour on the river until we meet our waiting vans. After we de-rig the boats and load the vans, we depart on the long drive back to UB via the agricultural regions of Bulgan and Erdenet, and arrive back in Ulaan Baatar later that evening. The possibility also exists for Mongolia savvy people to take the night train back from Erdenet.