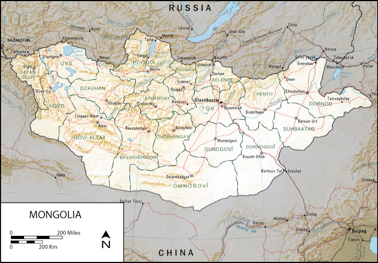 The image of Genghis Khan, stone-faced astride his war-horse accompanied by a horde of battle-hardened cavalry, may be historically accurate, but it is a long way from the modern reality of peaceful, Buddhist nomads following their herds of goats, sheep, and horses around the steppes while living in traditional circular felt tents (gers). Mongolia is a unique crossroads, where the landscape, history, and people intertwine to create a place unlike any other on earth.

Mongolia is located in Central Asia, nestled between Russia to the North, and China cupped around its other three sides. Roughly equal in size to Alaska, Mongolia is about the same latitude as the Western U.S. – Canada border. The landscape is a mixture of mountains and rolling plateaus, with mountainous higher elevations in the west and north of the country, sloping to lower ground in the south and east. The average elevation in Mongolia is around 5,000 ft. (1,500 m.), however, there are large mountain ranges with glacier-covered peaks over 14,000 feet in central and western Mongolia. The highest point in the country is the massif ‘Tavan Bogd Uul’ (14,350 ft., 4374 m) at the far western tip of Mongolia, marking the frontier with China and Russia.

The topography of the western end of the country is a mixture of volcanism, uplifted plateaus of Paleozoic and Mesozoic geology, and basin and range topography reminiscent of the American West. In the north the landscape is mountainous and covered by dense forests, large lakes, and serpentine rivers. The west and north regions of Mongolia are also considered seismically active, with many extinct volcanoes and hot springs. The southern third of the country is the vast Gobi Desert, a harsh beautiful landscape renowned for legendary sandstorms, dinosaur bones, and being the historical geographical barrier to Chinese invasion. To the east, open, rolling plains blanket the land and the lowest point in the country (1,700 ft., 518m.) is Hoh Nuur (lake) at the far eastern margin of Mongolia.

Landlocked at the center of Asia and far from the ocean’s moderating influence, Mongolia experiences a classic continental climate of brief, moderate summers and long, chilly winters. Because of its far northern latitude and inland location, winters bring cold temperatures, but little precipitation. Blizzards sweep across the steppes and bring deep snow to the mountains, but most winter weather is dry, cold, and clear. Average winter temperatures are below freezing.

In contrast, summers in Mongolia are pleasantly temperate and bring summer rains. Most precipitation falls in the months of July and August, with the wet, mountain areas receiving the majority of their annual precipitation (16 – 20 in., 40 – 50 cm) during those months. Meanwhile, the driest areas of Mongolia (in the Gobi) receive virtually no precipitation most years. In the spring, winds exceeding 90 mph can blow across the open Gobi, and summer high temperatures there may reach 100° F (38°C). In comparison, summer highs in Ulaan Baatar may be over 90°F (33°C), but the average July temperature in UB is in the mid-60’s°F (18°C).

For the current weather conditions in Ulaan Baatar, visit: http://news.bbc.co.uk/weather/forecast/1799

Mongolia’s rich culture is the result of its environment, heritage, and the resilience of the Mongolian people. Mongolia can claim one of the last truly nomadic cultures on earth, and the people are deeply tied to the land and to their history. About half of Mongolians still practice the traditional lifestyle of freely grazing their herds across the open steppes and mountains, and moving camps seasonally. With a population of less than 3 million people inhabiting a country about the size of Alaska, Mongolia is recognized as the least densely populated country in the world. Although ethnic diversity is high in the north and west of the country, 86% of the Mongolian population claim their tribal descent as ‘Khalk’, or from the tribe of Genghis ‘Chinggis’ Khan. Other tribes include, but are not limited to Kazakhs, Tuvans, Altai Uriankhai, Buryats, and Dukha.

Mongolia’s culture is inseparable from the horse, and is steeped in a past of nomadic tradition, warrior ancestry, and strong Tibetan Buddhist influence, overlapped by Chinese rule for several hundred years. In the 20th century, Mongolian culture was heavily influenced by Russian communism, emphasizing a collective society rather than long ingrained self-sufficiency.

Mongolia is currently a parliamentary republic. In this system, parliamentary representatives are elected first by popular vote, and then these representatives elect the government. The president is voted in by general election. Two main parties, the Mongolian People's Revolutionary Party (MPRP) and the Democratic Party (DP), have been alternately switching, then sharing, government rule for the last 20 years.

The Mongolian economy has traditionally been based on herding livestock, agriculture, and most recently, mining. Copper, gold, coal, molybdenum, tin, and tungsten are the primary mineral resources in Mongolia. Until 1990, one third of the country’s GDP was dependant on the USSR. That economic paradigm ended abruptly in 1990 with the imminent break-up of the Soviet Union. Since that time Mongolia has received generous sums of foreign aid to support its transition to a free market economy. The economic future of Mongolia will depend on its ability to exploit its mineral resources without being itself exploited by multi-national mining interests.